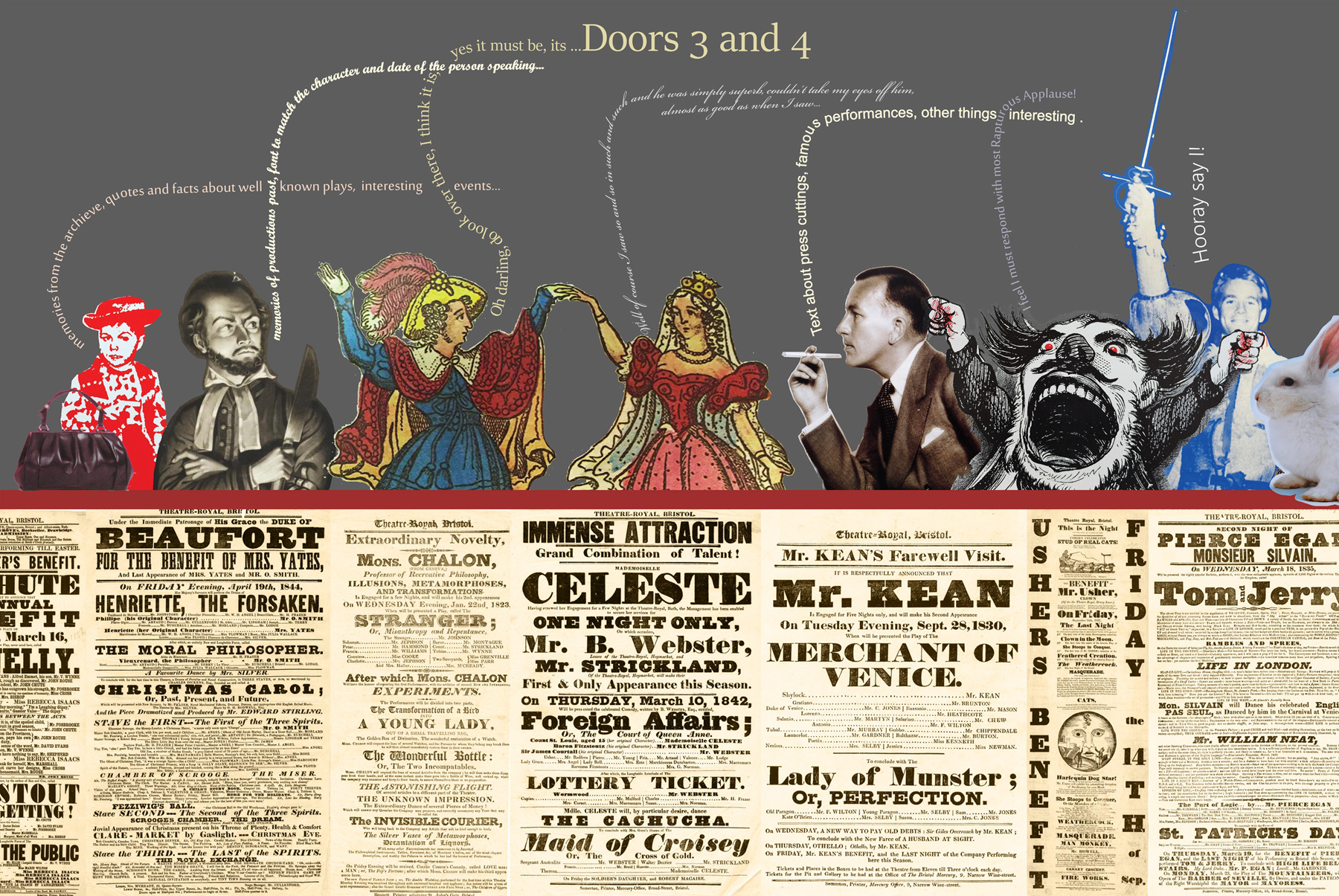 My design for the Bristol Old Vic went through several changes before it got to the final design you can now see in the theatre.  Above is the initial design, inspired by Peter Blake’s cover for Sgt. Pepper’s Lonely Hearts Club Band, which I submitted and that got chosen by the panel. 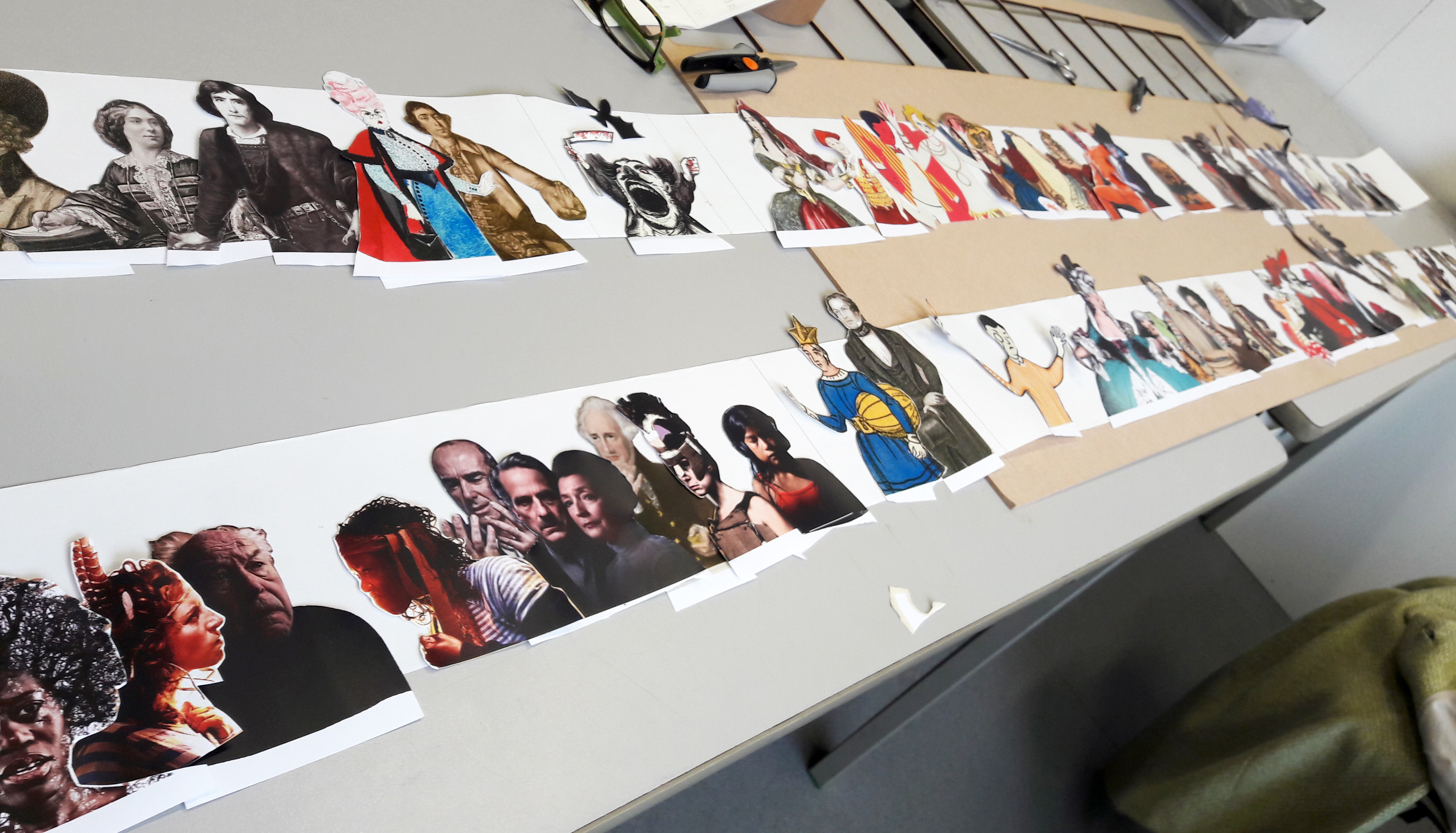 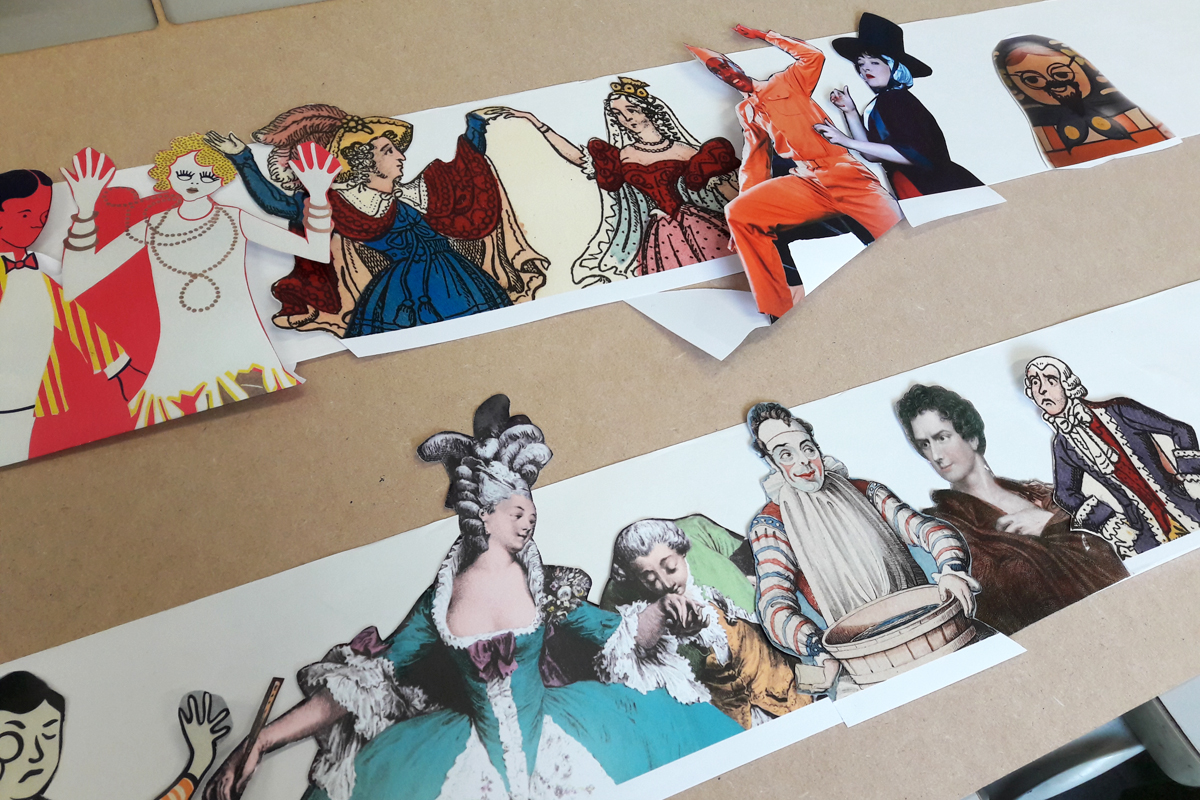 This is my second main design.  After lots of research to find enough appropriate images, I then spent a long time arranging the figures so that I felt they all told a story in relation to each other, as well as creating a visually pleasing along the walls. 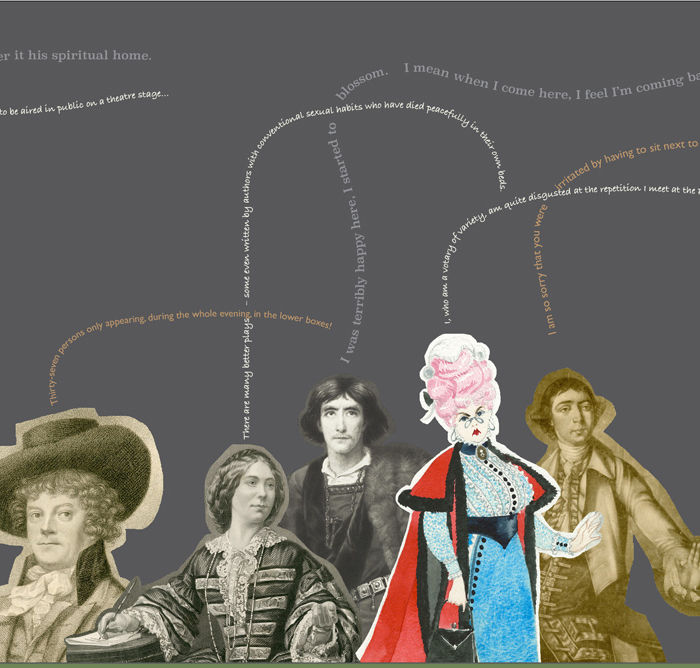 It was then decided to extend the design to have it on the three walls, rather than just two, and to incorporate the red that had been used in other areas of the foyer.  This gave me an opportunity to include more of the text based posters.  Below is the final design, but as the figures and speech were collaged onto the walls, it meant I still had some leeway to play with final placements as I installed the work. 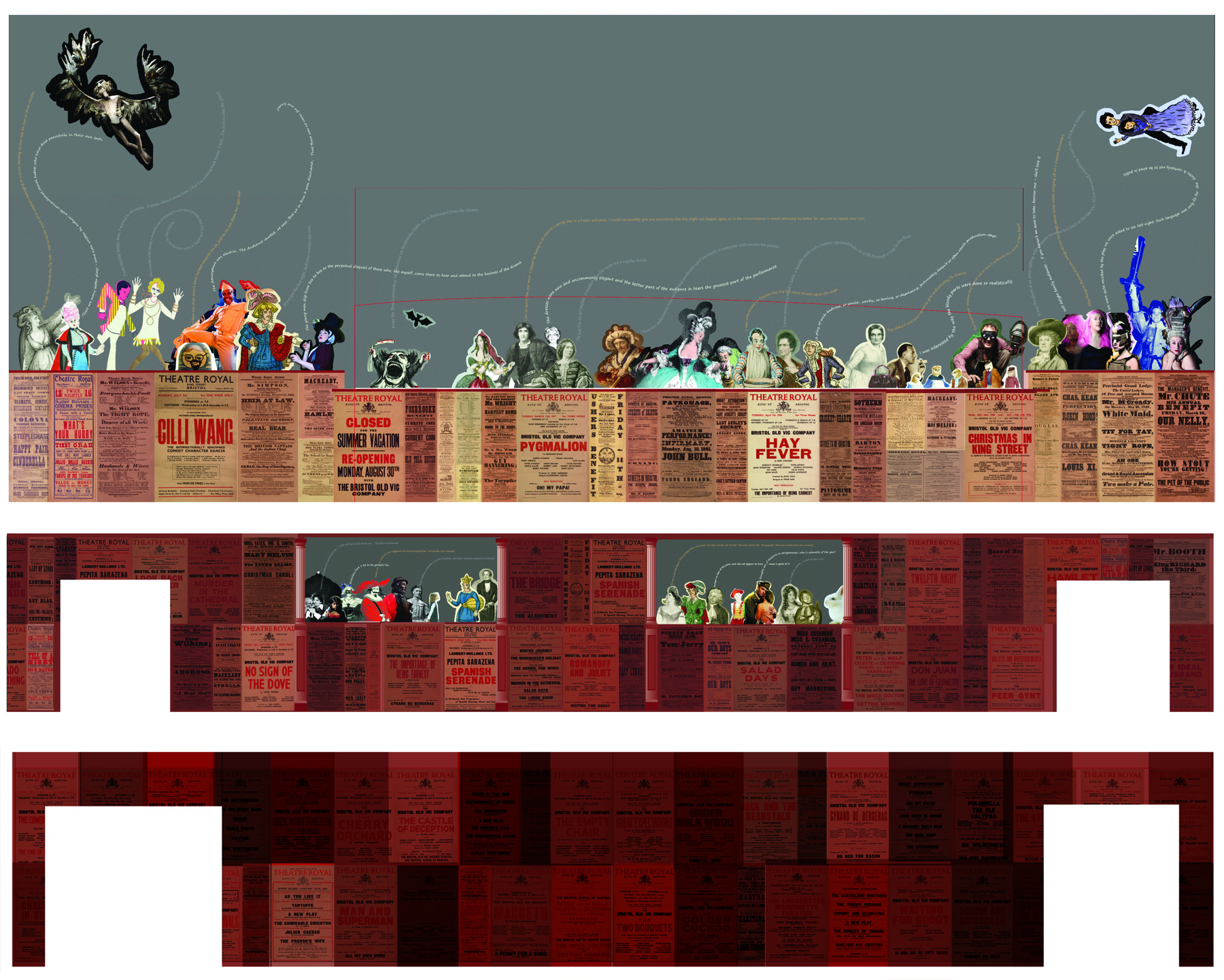 I am extremely happy with my final three walls. I like the way you catch glimpses of the design from the foyer and café, and how it changes with the different light of the day. I am especially pleased with my chatty, misbehaving audience up in the gallery. It has been lovely to watch people exploring the piece, and laughing as they spot details in the playbills, or read one of the quotes. 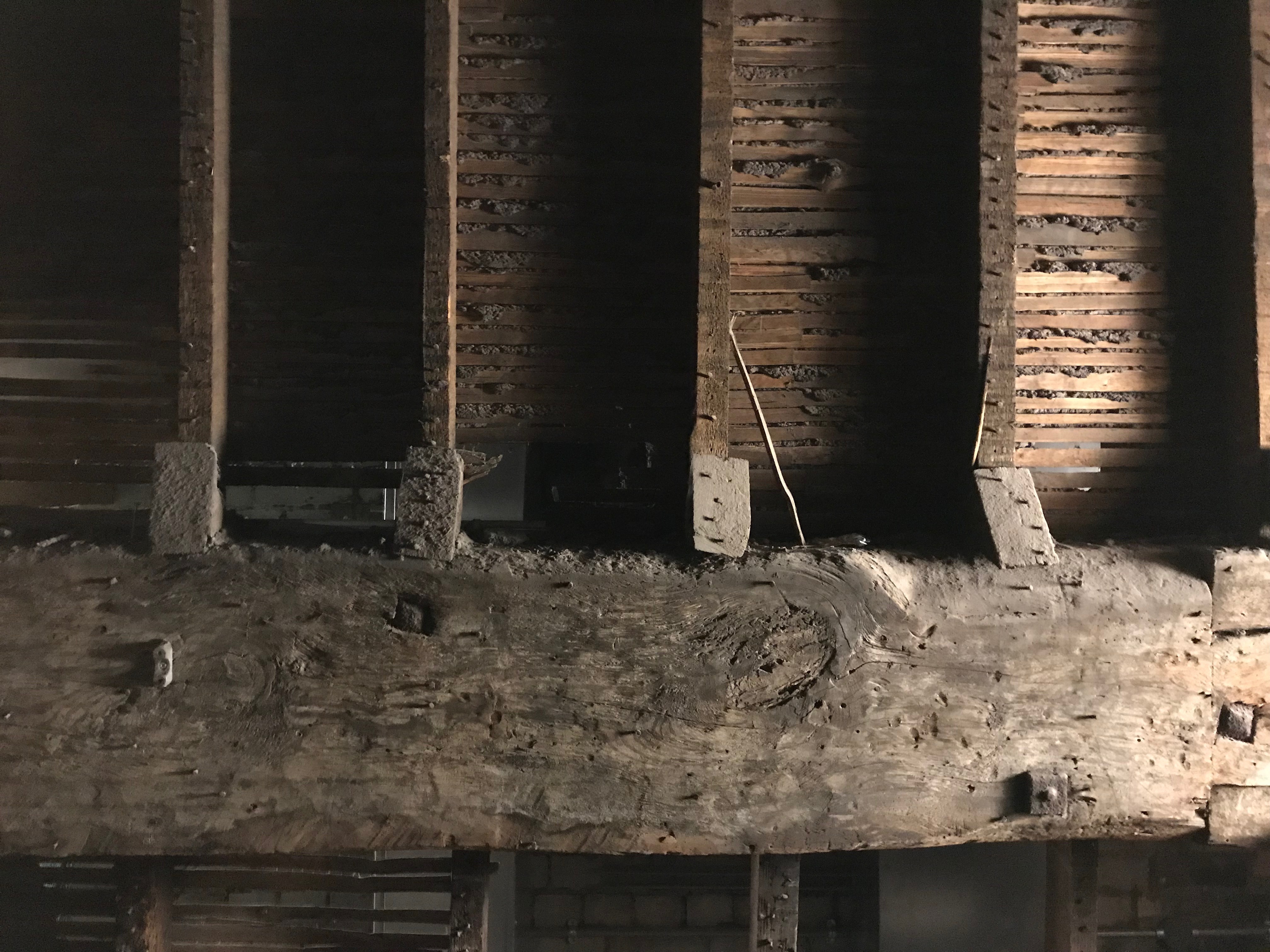 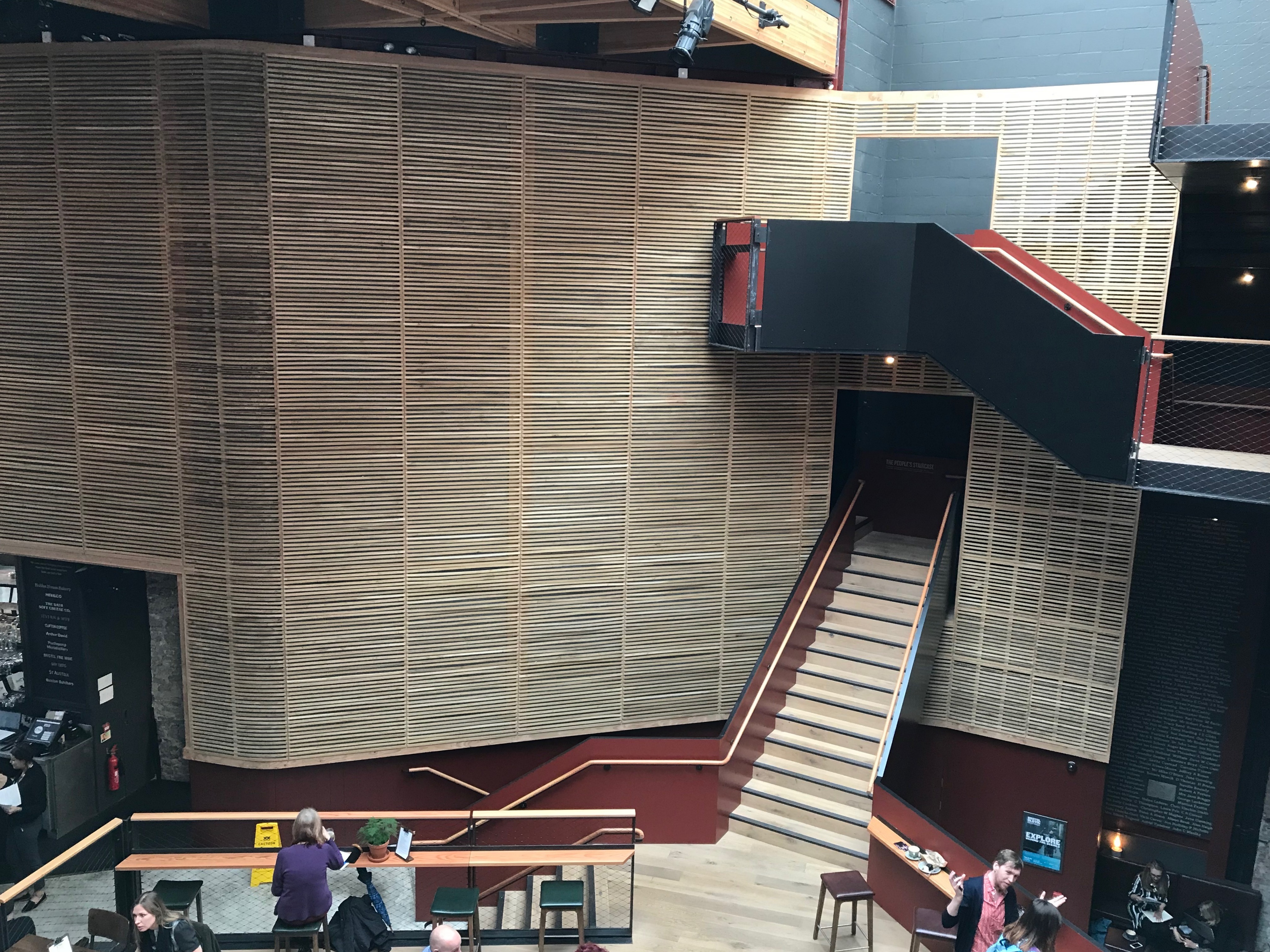 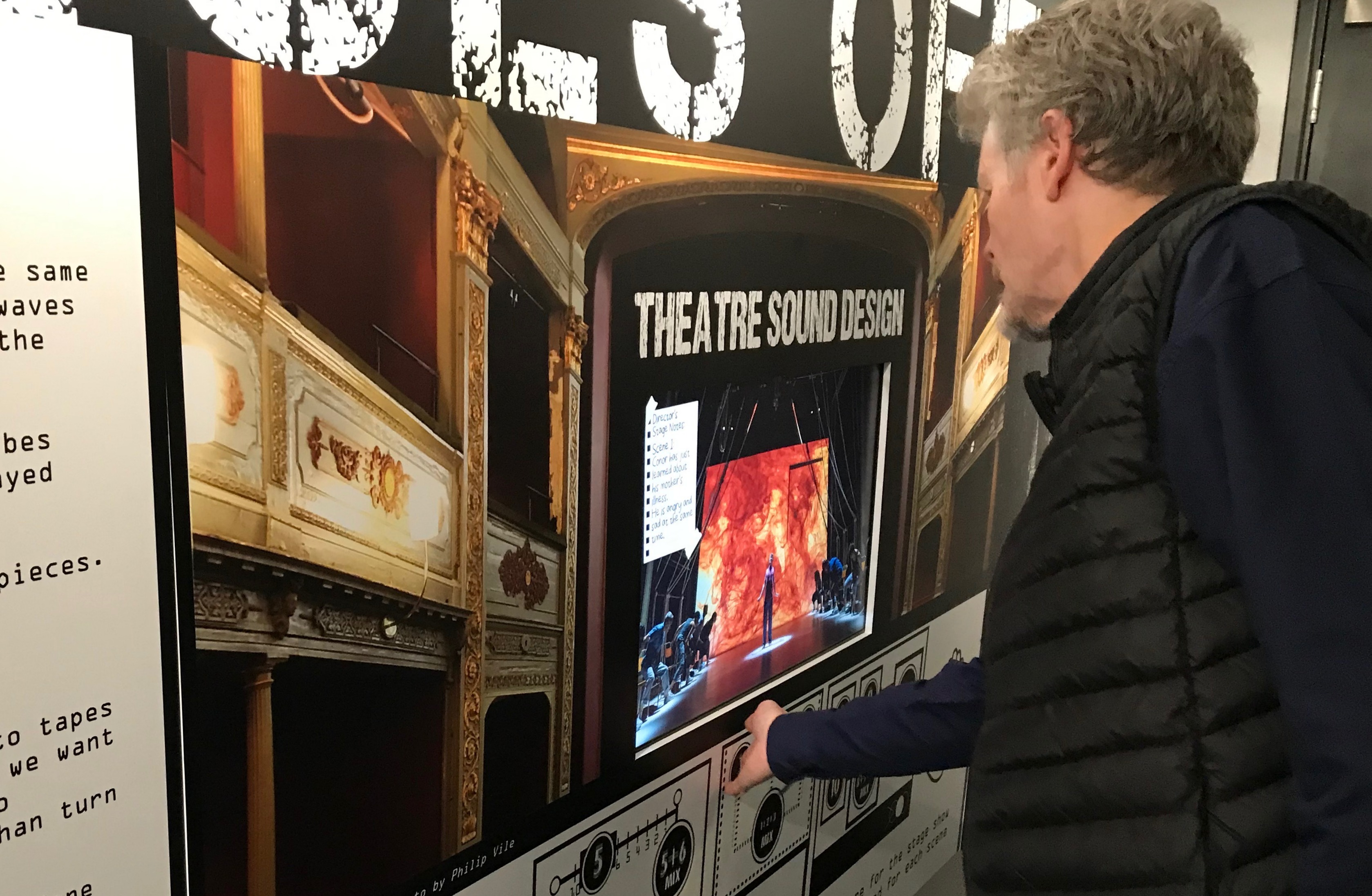 I spent yesterday exploring the new heritage project @BristolOldVic
Let's just say the city is in for a treat. The virtual reality app is astonishing and for theatre geeks like myself the bills and posters will immerse you for days.https://t.co/GOr5sb2FC1 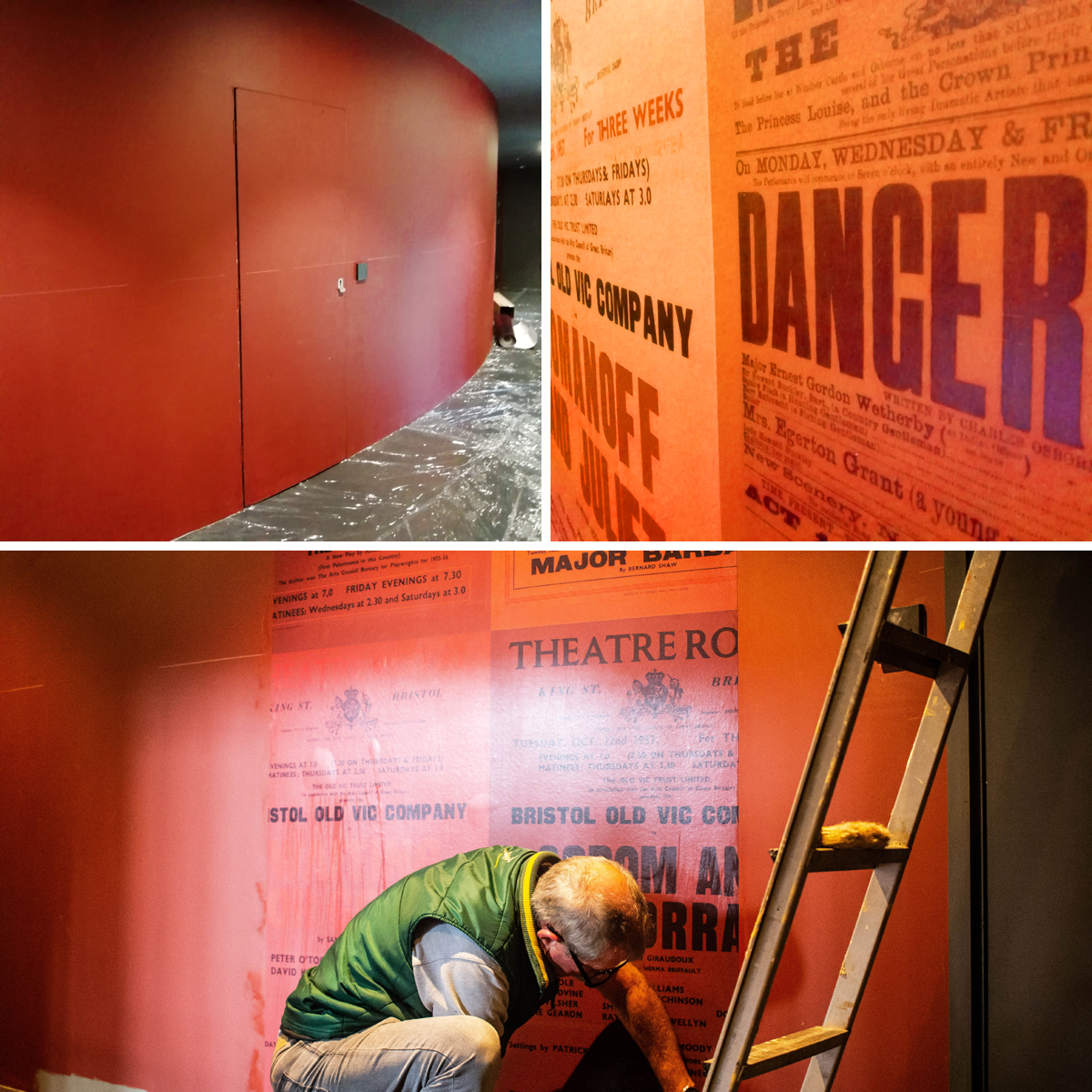 Turns out 130cm wide pieces of wall paper are really heavy and hard to manoeuvre!  Thank heavens for Printer Pete and his wonderful wall papering skills. 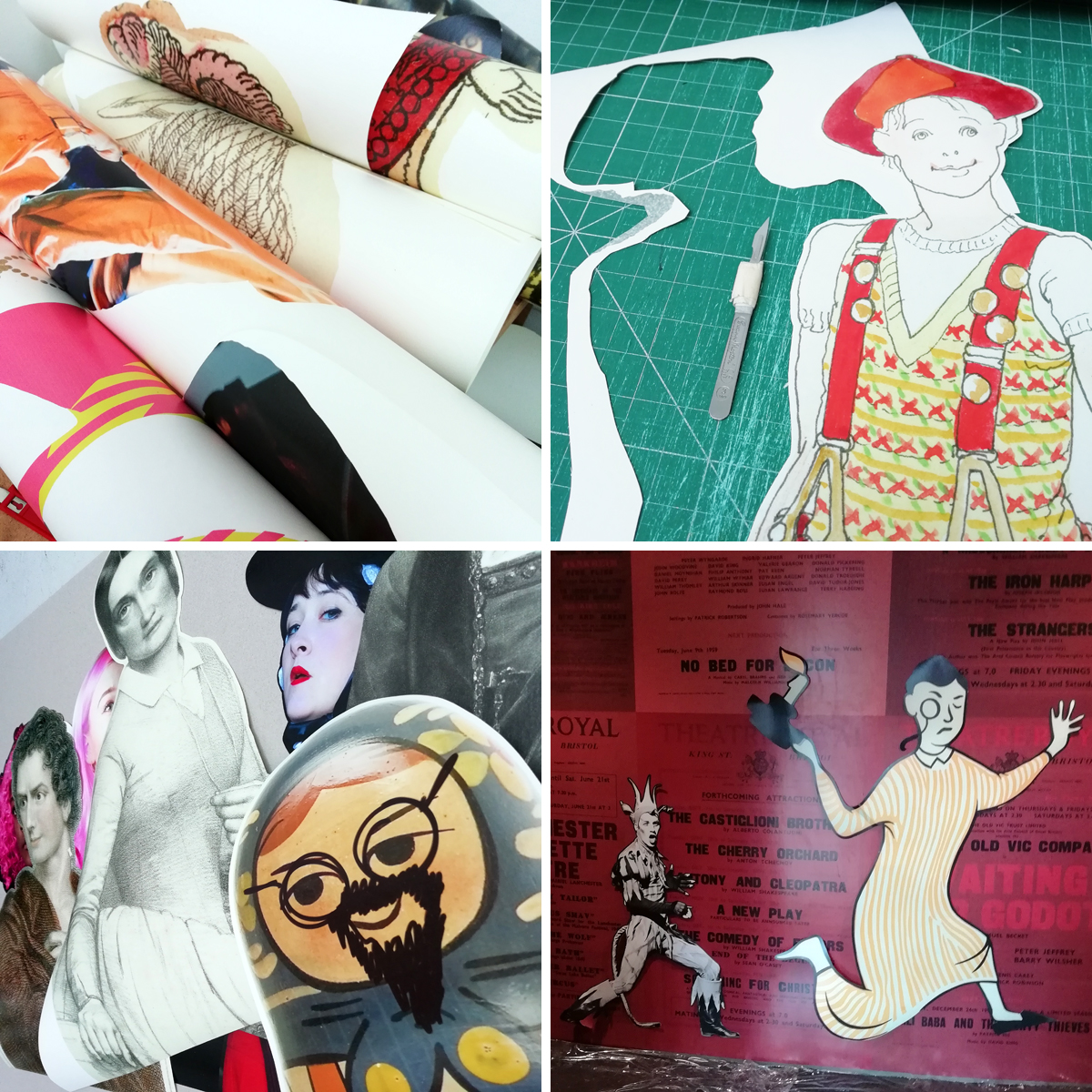 After all red, adding the figures was a joy!  I have been looking at them in small scale on a computer screen for so long that it was just lovely to see them printed large.  It felt like saying ‘hello’ to old friends as I was cutting them all out.  I am so happy that they all worked together as I had hoped – the different visual languages bounce off each other beautifully, I am a happy bunny. 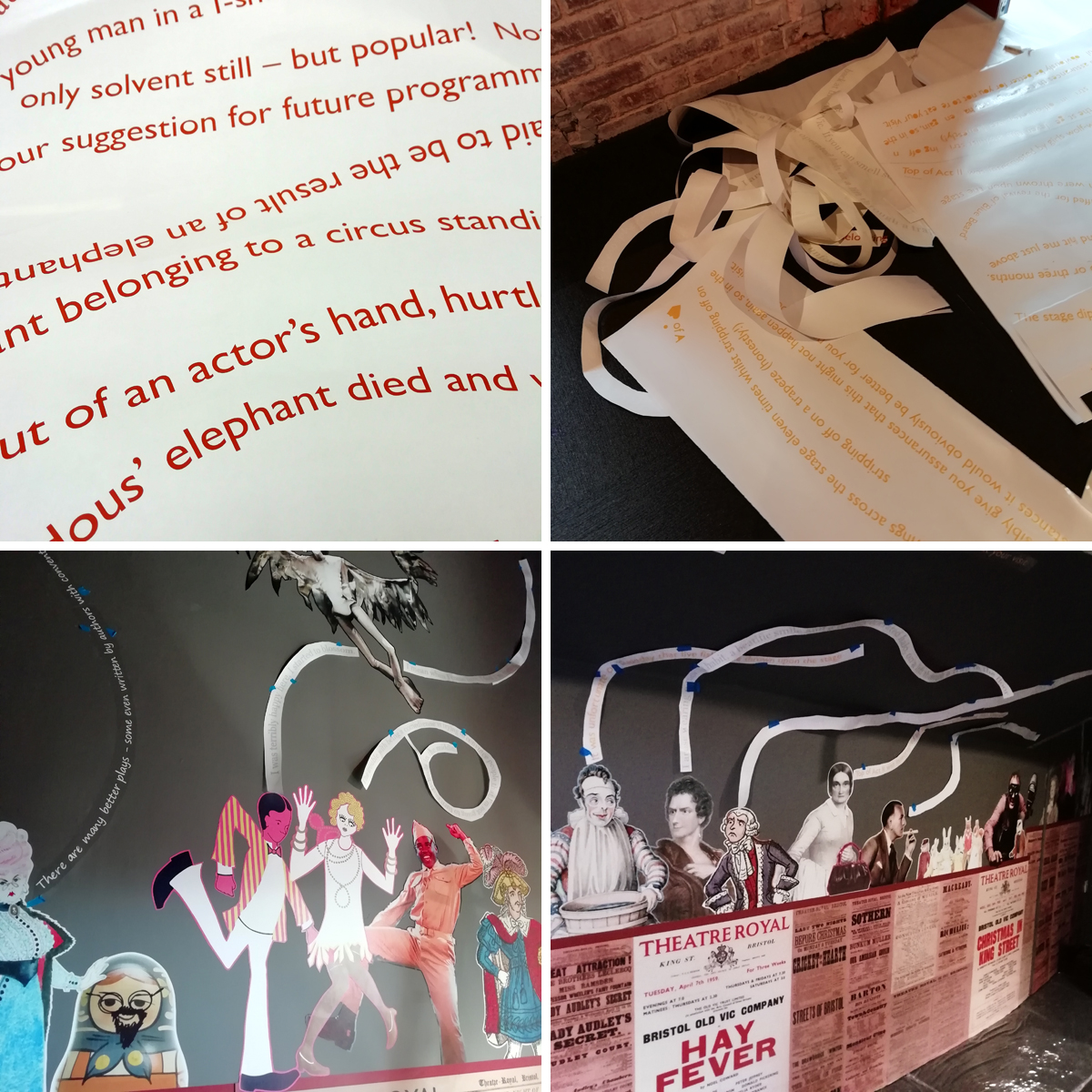 Miles and miles of lettering… 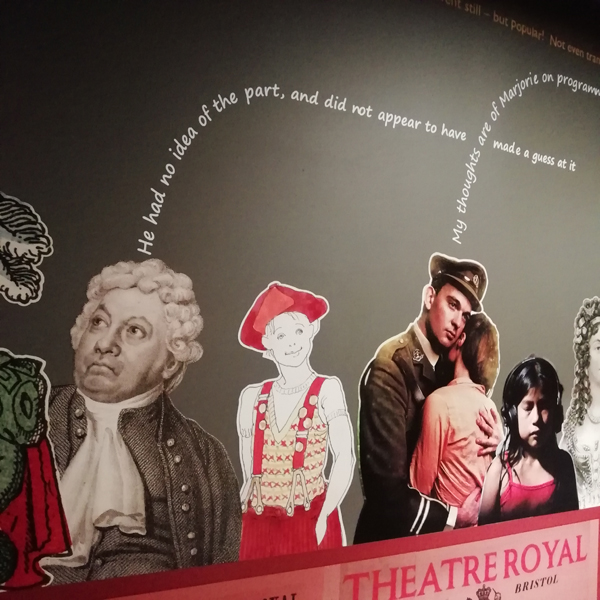 The Old Vic have just sent me this – it shows me installing part of ‘An Audience With The Past’ on the Gallery level of the theatre.  If you are quick, you can just see Pete and Ellie who helped me put it up.  It actually took eight days to put up all three levels.

What I’ve been talking about…